I realized that SO much has changed for Seth in the last month, and I haven’t shared on my blog! It is AMAZING the growth I have seen in him! 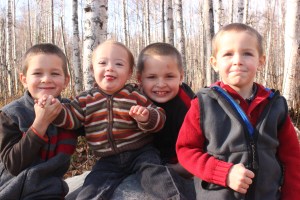 1) 4-point crawling is now his default mode of travel! He started his first 4-point crawl at the beginning of September, when he was in the nursery at Awana! I was in there with him, and he got up on his hands and knees, crawled 4 spaces, signed milk, and said, “Please!” It was SO incredible! I was SO excited!!

After that, he would revert back to the belly sliding most of the time and I was getting rather discouraged, but one funny story about that is that I would tell him “get up on your knees” and he would for a pace or two, then drop back down. After about a week of that, I would say, “Get up on your knees, Seth!” and he would laugh and start belly crawling away faster! He is such a little stinker bug!! 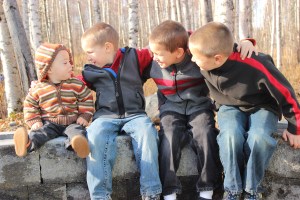 I was getting a little discouraged again, (why do I always do that to myself!?), so I started “making him” crawl on his knees up and down the hallway, like I did when he was first learning how to make forward motion. This time was a little more challenging though, for as soon as I would get in front of him to encourage him forward, he would drop back down onto his belly and scoot. Eventually, after several days of multiple times up and down the hallway, he gave up the belly crawling for the much faster mode of 4-point crawling. He’ll still drop down on his belly at times, especially if it is a nice slick floor (he’s NO dummy!), and “glide” across the floor at top speed!

3) Seth is now pulling up on EVERYTHING, including the coffee table, bar stools, chairs, laundry baskets, toys, beds, mats, etc! He is now cruising along any surface, and passing back and forth between items! 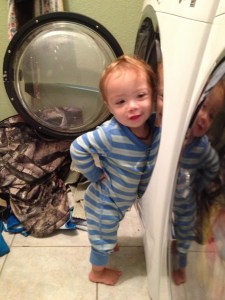 He has learned the fine art of climbing from place to place, including the stairs. On Sunday, he climbed all the way to the top of the stairs at church to the youth room with no one noticing, and started hollering because it echoes up there! He will climb up onto the floor mats in his sister’s room and then onto the bed by the mat, and two days ago, he climbed A LADDER!! It’s a good thing his brother was around to spot him!! 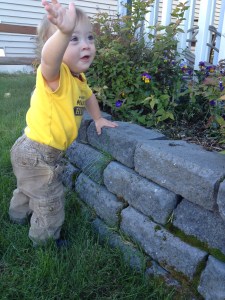 He will stand against the wall for a long time, playing ball with me, until he tires and lowers himself down to a sitting position! He will also stand at the coffee table, and barely hold on with one hand while playing with whatever he can get his hands onto. 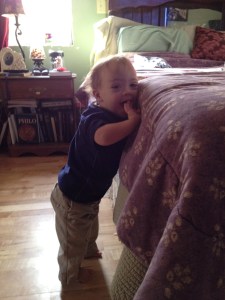 2) After he started 4-point crawling, it was like his brain exploded with new energy. He has added A LOT of new signs to his list! He now signs the following words, and will put 2-3 signs together to get what he wants, like “eat more,” “more cracker,” “more milk please,” etc.:

(* denotes it is a brand new sign from last week! It seems like I am missing a few, but I can’t think of them right now.) He will try just about any sign I show him, so I’m trying to expand his “vocabulary” while he is still a sponge, yet maintaining the ones he knew before. Naomi and I have started signing the song “Father, I Adore You” to him, and he will roll his hands around trying to copy us! It is SO good to be able to communicate with him more!!

3) His siblings have taught him a new game too. They will ask him, “Where do you want to go?” and he will emphatically point and say, “Dat dey!!” to which they will run with him in their arms, in whatever direction he indicates. 😀 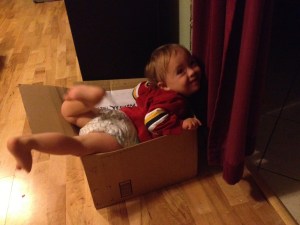 4) He can now place the rings onto his stacker, and tonight at dinner, he was stacking the coasters up on top of his cup! He also puts the balls into his ball popper  (it only had a small ball-sized hole) and can almost hit the plunger hard enough to start it.

While eating meals, he has figured out how to hold his cup completely on his own, and then set it down in the designated circle on the high chair tray! He loves to do it because his siblings all clap for him, so he claps too! 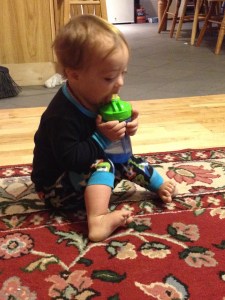 I ordered a new toy for him, and it came in the mail today. I can’t wait to introduce it to him and see how he does! I’ll try to take pictures!

5) He is also “reading”! He has been using Little Reader through Brillkids, and I really didn’t think he was getting much out of it. I have the iAccess with his account, and we use the iPad mostly, so it’s touch screen. He is now tapping the “page” to turn the “page.”

ALSO, at the end of each section is a game time. I usually skip through that pretty quickly, because I assumed he couldn’t do it. Well, one day, I let him try, and he picked the right response! It prompts him to respond such as “Touch the pig.” AND HE DID IT!! I was SO surprised! Joey is using Little Reader too, and Seth will crawl over to him and take the iPad away for himself! It is just amazing how much this kiddo LOVES to learn!! 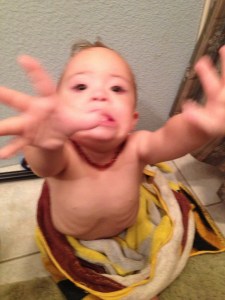 Ok, enough bragging for now! I need to get some sleep so I can keep up with him!

May the Lord bless you and your family!