I’m trying these right now! I can’t wait to see how they turn out! I’ll post pictures.

Molly’s Money Saving Digest is a great monthly tool for learning new tricks and ideas for saving not only money, but your sanity, in a broad spectrum of areas of life.  Her topic this month is Organization for Busy Families. Whether you have one child or several, like I do, you will be sure to find some ideas that will help in organizing twelve areas of your home, from the bathroom to files on your computer.

One of my favorite features is the recipes for making your own make-ahead mixes to help you save money by not buying pre-made boxed mixes.  These mixes are also healthier for you, as they don’t have all of the additives and preservatives that go into the boxed type, but you still have the convenience of having so much of it ready-made.

You will also read craft ideas, a list of special dates for the month, photos, and links for further research on the internet.

I thoroughly enjoyed reading through the Digest, and am looking forward to trying many of the recipes and ideas included. 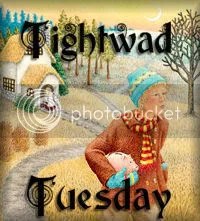 I have decided to start doing recipes on my blog.  I have been making quite a few new recipes, and thought I would share them here.  This will be one way I can keep current on my blog, and maybe people will want to stop by more often.

Speaking of which, would you all mind leaving a comment or two when you stop by?  I show that I get some traffic, but I never hear if what I am saying is really worth saying. ;-0  Anyway, it would just be nice to know who is stopping by!  LOL!

The first recipe I would like to share is my homemade Tomato soup.  I have been wanting to eat some, but when I went to the store to buy some, I found that it had corn syrup in it.  The reason I have been reading labels lately is because my almost 8yo son appears to be allergic to corn syrup and possibly corn starch.  He doesn’t seem to react to popcorn or to corn kernels though.  Anyway, then I had the quest to find a tomato soup recipe that didn’t include an ingredient that had corn syrup/starch in it!  I browsed many soup recipes on the Allrecipes.com site, and finally found one!  Here it is…and it’s GOOD too!  I am so glad I was forced to "think outside the box!"

In a large saucepan, bring the tomatoes and broth to a boil. Reduce heat; cover and simmer for 10 minutes. Add basil and sugar. Reduce heat to low; stir in cream and butter. Cook until butter is melted.

We had it with Grilled cheese sandwiches.  It had a very "fresh" tomato taste, as dh put it.  The kids and dh all loved it!  By the way, this would be great to make on Valentines Day for lunch, with some heart shaped sandwiches!  Wouldn’t that be fun!

Oh, and with some of the leftover whipping cream dh and I made "cool whip" to go on the chocolate pudding that dh discovered in the pantry and consequently made.  Here is that recipe:

Dh just used a whisk and whipped it.  It didn’t take very long either, and was really good!  I thought it had a little too much vanilla, but no one else minded it!  Homemade is the way to go, especially if you get the whipping cream on clearance!

HisWillingVessel has a great way to make microwave popcorn from scratch!  I can’t wait to pick up some kernels so we can try it!

She also has a neat sounding recipe for making your own vanilla extract!  I am hoping to find some vanilla beans today so I can make some.  It would be a great gift idea for the church families for Christmas!

I can’t wait to discover what else she has on her site.  Check them out!

I think I am going to start keeping track of what we have for dinner on my blog so I can refer back to it, so here goes what I can remember for the week:

Ok, that's as far back as I can remember.  Tomorrow is potluck at church, and I am thinking of taking brownies, mashed potatoes, and some moose hamburger gravy to go with it.  I have to run it by dh though and see if he approves.  My backup plan would be to make another batch of Colorful Kielbasa.  It's always a big hit.

On the agenda for next week is (not necessarily in this order):

That's all I can think of right now.

I made this for dinner last night.  It is one of dh's favorite meals.  It is SO good, that I thought I would place it here for you all to enjoy.  The best part about this recipe is that it goes together really quickly!

I had some french bread dough in the freezer that I got out around 2pm.  By 5pm, it had thawed, and I shaped it into rolls.  They turned out SO good and were a big hit with the salad!